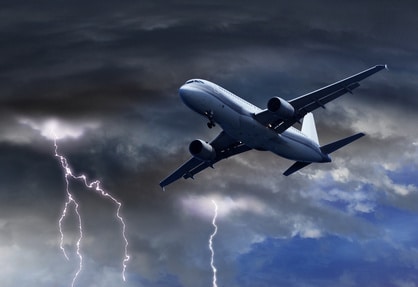 ​When the lights go off, and you suddenly hear a loud, thumping noise aboard the aircraft (and maybe feel a bit rattled), you probably try to shake off your surprise and calm yourself down.

“Is the aircraft safe?”

“Was it a rough landing?”

“Are there potholes and bumps miles above ground?”

For seasoned jet setters, turbulence can be an unwelcome part of any trip. But what’s a smart traveler to do when these kinds of disturbances happen? Today, we will be talking about the lowdown on turbulence, and how it’s not the antagonist, you may think it is.

As our airplanes travel across regions, they travel through the air currents. Generally, this is a smooth transition, but there may be instances where these pockets of air become a bit disturbed and choppy - think splashing waves that disrupt the calm seas when you’re on a boat. These eddies of rough air are responsible for all the intense jostling, and may range from a few moments to a series of “shakes.”

This fear-inducing phenomenon may be due to different factors including strong winds accompanied by adverse weather conditions, the jet stream or air currents, traveling across mountains or tall structures which may alter airflow.

Especially if your airport is situated near tall buildings or a mountain range, you may experience a bit of turbulence upon take-off or during landing[1].

There are also differences in pressure, which may be due to weather conditions, disrupting airflow. The aircraft may encounter minor disturbances, and these movements may seem amplified inside the air cabin, moving so much more than the plane has.

It is estimated that around a fourth[2] of all Americans get jittery before flying. Aviophobia, or the fear of flying, affects approximately 6.5% of the whole lot[2].

Most of these passengers don’t even mean to feel this way - they just feel a certain dread and anxiousness that accompanies some symptoms of anxiety.

For starters, we have to remember that turbulence is a regular occurrence. As the altitudes and pressures above ground shifts, there are “air pockets” that may make your voyage a bit bumpy.

Flying is considered to be one of the safest ways to travel, that is why even though it feels a bit scary, airplanes are built to withstand harsh conditions and possible problems that may arise.

According to seasoned pilot Patrick Smith on his website “Ask the Pilot,” planes “cannot be flipped upside down, thrown into a tailspin, or otherwise flung from the sky by even the mightiest gust or air pocket.”[3]

Although there might have been isolated cases of extreme turbulence, which have resulted in damaged aircraft parts and injuries, the numbers aren’t significant, and most of those who are injured are flight attendants and passengers who weren’t able to get their belts on in time.

While we’re on the subject of planes and their enormous capacity to withstand any kind of harsh condition, we must dive in a little deeper on the type of tests that planes go through before taking off.

Some tests include bending wings up to maximum angles and getting them to snap, to gather data about their breaking point. There are also engine ingestion tests involving birds and water, which have caused problems in primitive aircraft models[4].

Aircraft engineers also have a specific test for testing extreme temperatures — lightning and altitudes, which ensure optimum performance even in unforgiving weather conditions.

Admittedly, we’ve come a long way since the earlier days of aircraft travel, where safety wasn’t much of a priority, and all of our technology was still too problematic and outdated.

It is also worth mentioning that pilots are specifically trained to handle these kinds of inconveniences - most of them are even worried about how their passengers might feel, rather than the actual turbulence.

Most pilots even know when it’s going to happen, mostly because they have all the equipment and reports to prepare for them early on.

If you’re suffering from some form of travel-related anxiety or aviophobia, it’s best to pace yourself and prepare yourself.

As we have mentioned, most pilots do know where turbulence could occur - that is why when they light up the “Fasten Seatbelt” sign, best believe you have to.

If you can manage to catch up on some hours of snoozes, try to relax and maybe take some natural sleep aids to help you on your way.

If you don’t want to end up too groggy to reach out for your luggage, you can try other diversions. Some passengers try to shift their weight, bounce on their seats, or even do some in-flight stretching and leg exercises (which are meant to prevent deep vein thrombosis).

Try out some puzzles like Sudoku or Crosswords, or anything that requires some form of concentration, as this would shift your focus on something else. Listen to some music, catch up on that last season of your favorite show, or talk to your travel buddy as you go through the bumps together.

You can even do some forms of meditation and deep breathing exercises, which can help you pace yourself and relax your mind. This helps especially in cases of moderate to severe anxiety - when you feel your throat closing up and your vision tunneling, breathe in and out.

Being conscious about your breathing is an excellent technique to master, even before the anxiety kicks in.

If anything, turbulence is something that travelers have to deal with to reach their desired destinations. With the proper mindset and adequate preparation, traveling can be a breeze - trust us, it takes much more than an air pocket to tear down a metal mammoth. Happy traveling!

Our goal is simple: provide you the most complete information you can about your upcoming travels, purchases, and more. We want you to be 100% confident in making your next flight, purchase, or anything travel related.